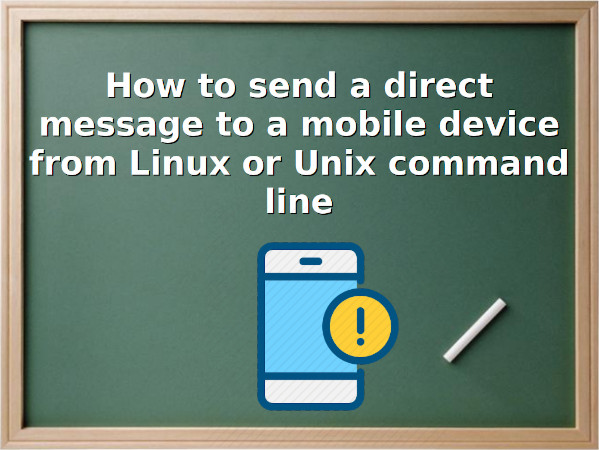 One of the essential tasks for developers and sysadmin is to get an alert notification about failed services or running out of disk space and other critical failures. Let us see how to send or push a direct message to a mobile device powered by Apple iOS or Google Android phone.

We can use the AWS SNS push notification service to send an alert directly to an application on a mobile device. However, today I am going to use straightforward app service called Pushover. It is a simple app to get real-time notifications on Android, iPhone, iPad, and Desktop, including Android Wear and Apple Watch.

As an independent developer and Linux sysadmin, I needed a simple way to get a notification for my side projects using API. I can get a notification for failed backups or my Nginx service overloaded due to problems or MySQL read-only replica running out of sync. My search ended with Pushover. However, it is not a free service. To use Pushover for yourself or a small group, it’s just a USD $5 one-time purchase on each platform. You can send 7,500 messages per month, which is more than sufficient for my needs. They also have an option to send messages for a group of developers and IT teams. My criteria were simple:

The Pushover service seems to fit all my requirements. Enough talk, let’s get our hands-on dirty with some examples.

Make sure you subscribe to service or get a seven-day trial account. Once logged in, register your cli application, set its name, and get an API token in return.

Next, use the source command:
$ source ~/bin/cli_app.sh
Test it:
$ push_to_mobile "bash-notification" "This is a test. Job foo failed on $HOSTNAME @ $(date)"
Immediately I will get a notification on my phone:

We can simple use the sendmail command or mail command as follows from our shell scripts:

See the following tutorials for more information about sending emails from the CLI:

So far, Pushover service and app worked great for me. I can easily send/push messages to iOS and Android devices using shell/Perl/Python scripts. Check out all other suggestions on my Twitter thread:

We use a paid solution (APIs/Apps) to push critical messages regarding IT infrastructure (servers/VMs/routers/firewalls) to sysadmin and ops teams iOS/Android phones. Are there any *free* Apps/services for *personal* projects to push notifications in real-time to iOS/Android?